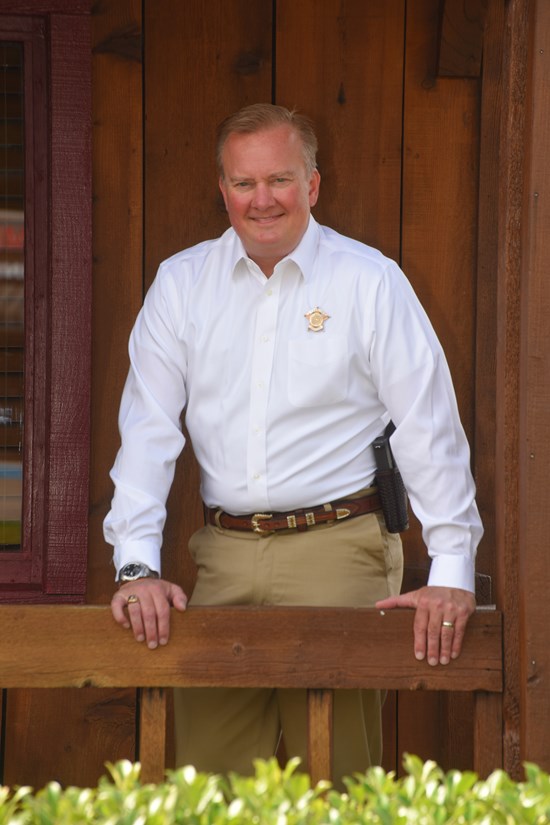 Rand Henderson is a native Texan and lifelong public servant with both law enforcement and corrections experience who has served the Montgomery County community since 1994. He was elected Montgomery County Sheriff and was sworn into office January 1, 2017. He holds a Master Peace Officer Certification, Law Enforcement Instructor License, Crime Prevention Inspector License, and a Texas Jail License. He is married to the love of his life, Christina, who is a native of Conroe and an 11th grade English Teacher at Willis High School. They have two children, Rylie and Reid, who attend Willis schools. Rand graduated from Palestine High School and attended college at Sam Houston State University (SHSU) in Huntsville where he received Bachelor of Science (1994) and Master of Science (2007) degrees in Criminal Justice. Rand is a graduate of the FBI National Academy (Session #232) and the Leadership Command College (Class #48).

Rand worked his way through college as a full time correctional officer at the Texas Department of Corrections at the Huntsville “Walls” unit in downtown Huntsville. At the Walls, he provided security at the unit and for numerous executions that took place during his tenure. Immediately upon graduation with his Bachelor of Science degree in 1994, he began training as a Montgomery County Sheriff’s Office cadet attending the Texas Peace Officer Academic Licensing Academy (TPOALA), which was co-hosted by Sam Houston State and the MCSO. After graduating from the police academy in 1994, Rand was hired by the MCSO and began working as a Deputy assigned to The Woodlands Division of Patrol District 2. Rand excelled as a Patrol Deputy and was recognized as The Woodlands Patrol Officer of the Year for 1997 for his efforts in street level enforcement, as a community policing deputy, and in his role as liaison to The Woodlands Watch. One incident of note that led to the honor was when Rand found a suspicious vehicle during his routine night shift patrol. He approached the vehicle, which was parked in a hidden location behind an elementary school in The Woodlands. The driver fled and Rand was able to stop the car and conduct an investigation whereby he found that the male driver was in the process of attempting to sexually assault a young boy. Because of his aggressive patrol tactics, the sexual assault never occurred, but the suspect was arrested and charged with felony Child Indecency. The suspect was found to be on Parole in Florida for a similar child sex crime and Rand traveled to Miami to testify in a Parole hearing where the suspect was sentenced to life in prison. 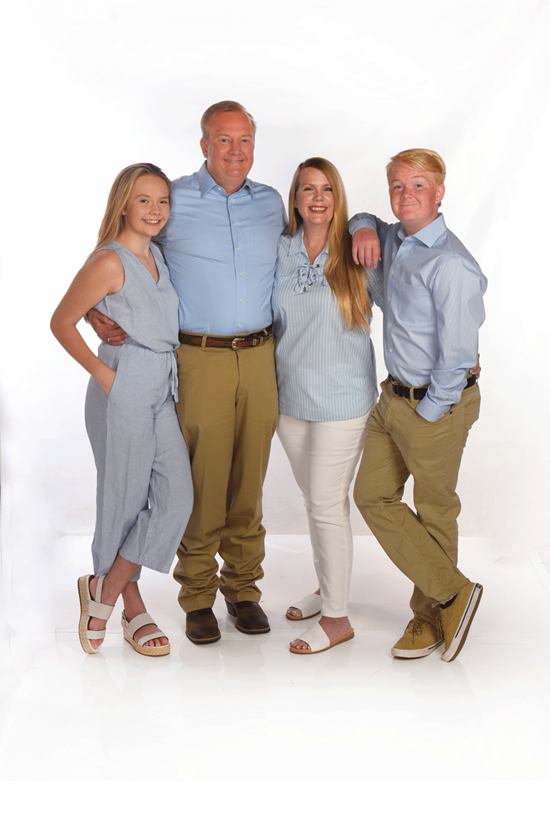 Rand received his first promotion in 1998 to the rank of Corporal where he continued to train and practice the art of community policing in The Woodlands as well as perform shift supervisor functions, and train new deputies in the field training program. Rand was promoted to Patrol Sergeant (first-line supervisor) in 2000 and he served as an evening shift sergeant and then as a day shift sergeant assigned to District 1 in Conroe. He served in that capacity until promotion to Lieutenant (mid-manager) in 2002 at the age of 31. He is still the youngest person to hold that rank in the modern history of the MCSO. As the MCSO Administrative Lieutenant, Rand was tasked with a variety of specialized jobs such as Public Information Officer, technical writer for all internal policies, grant application author and manager, agency webmaster, emergency management specialist, and field training program coordinator.

In 2004, Rand attended the Law Enforcement Management Institute of Texas (LEMIT) Leadership Command College (LCC). This program is designed for Texas law enforcement executive development and is held in three week modules in three different locations across the State. Many LCC attendees take years to complete the program if they are able to complete it at all. Rand attended all three modules and completed his administrative research paper all in one calendar year and he is proud to have graduated with class #48 in October 2004.

In 2005, the first year of Sheriff Tommy Gage’s administration, he transferred to Patrol District 1 where he served as the District Commander and managed 25 line level deputies and first line supervisors. In 2006, he transferred to the Internal Affairs Unit where he managed all internal investigations of allegations of misconduct, use of force, officer involved shootings, and worked to develop policies as well as ensure policy compliance. While working in Internal Affairs, Rand returned to Sam Houston State where he earned a Master of Science in Criminal Justice Management in August 2007. In January 2008, Rand was selected to attend the prestigious FBI National Academy, graduating with Session #232. He completed the vaunted “Yellow Brick Road” physical challenge as well as 12 Master’s level college hours through the University of Virginia.

In August of 2009, Sheriff Gage promoted Rand to the rank of Captain where he was assigned as the manager of the Patrol Division overseeing 154 commissioned deputies, supervisors, and support staff. He was also tasked with managing specialized units such as the Regional Training Academy, Motorcycle Traffic Unit, K-9 Unit, Recruiting Unit, Basic Peace Officer Course, Crime Prevention, and Crime Stoppers. Rand was instrumental in bringing new technology, modern best practices for training, and a program focused on using statistical data to determine Patrol “hot spots” that were then addressed using community based and problem solving method approaches to reduce repeated reactive calls for service. 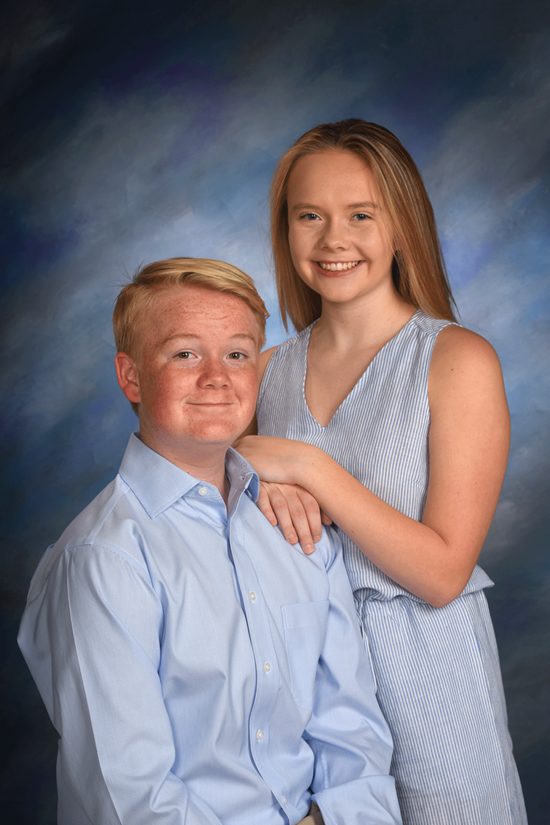 Rand was assigned to the Jail Division in 2013 as a Captain overseeing 292 civilian and commissioned employees, a budget of $36 million, and an inmate population of 1253 beds. Other specialized units that made up the command were the Bailiff Unit, Transport Unit, facility maintenance, central records, and courthouse security. Rand was regarded for bringing in a level of communication and leadership not previously seen in the Jail. He brought about facility improvement, used problem solving to improve operation efficiency and effectiveness, and used innovative means to combat a serious inmate overcrowding and employee under-staffing problem. He maintained the role of Academy Training Director from 2010 until 2016, and he is an advocate for providing the best training available to all employees at the Sheriff’s Office and outside law enforcement agencies. As Academy Director, Rand led at all levels of training including basic peace officer training, weapons and munitions training, in-service training, physical self-defense, and specialized law enforcement courses.

He has also held a prominent role in Emergency Management serving as Incident Commander during hurricanes Katrina, Rita, and Ike. As incident commander during the 12 hour night shifts, he oversaw all operations for the county to include incident response, procurement of assets, and planning for events to come as well as addressing problems as they arose. He was selected to serve as the Law Enforcement Branch Commander and Public Information Officer during the Magnolia area wildfires of 2011. He has also served on anti-terrorism planning committees with the Urban Area Security Initiative (UASI) as well as criminal justice committees with the Houston-Galveston Area Council (H-GAC).

Rand has worked as an adjunct professor of Criminal Justice at both Lone Star College and at his alma mater, Sam Houston State. He has taught and inspired traditional college-age students as well as the older non-traditional student with many of them joining him at the Montgomery County Sheriff’s Office. Other students have gone into all levels of law enforcement, corrections, and even enter law school.